The Legend Of Spanish Fowl

Spanish Fowl was the Assiniboia Racing Club’s (ARC) first thoroughbred to race. Established in 2016, ARC had bad luck with the first horse they purchased. Smed, claimed for $5000 US at an American track, was working out with trainer Tanya Lindsay. She noted a problem and the big bay gelding was found to have a stress fracture and had to be retired.

With only a few dollars left in the club’s kitty, John Field found a bargain priced filly, Spanish Fowl, a three-year old daughter of Spaniard out of Crusty Duck at Woodbine. ARC members, Louise and Jim Townsend, who were in Toronto for an unrelated event, tracked her down at a horse farm near Nobleton ON, where she was waiting for transport to ASD (see photo right).

Her season with ARC was a screen-writer’s horse-story drama. She was our trainer’s nightmare and the gate crew’s challenge. She finished fifth and seventh in her first two starts. The troubled ARC’s founding season became the subject of news articles by Ivan Bigg for Canstar Community News and George Williams for Canadian Thoroughbred Magazine. Those stories, described how in her last start on September 10, after two near misses, came to a dramatic conclusion. 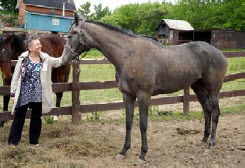 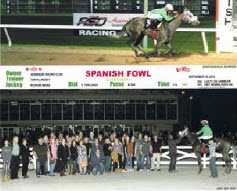 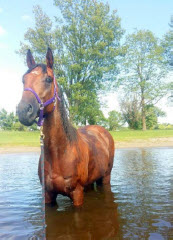 Guided by Richard Mairs, she claimed a whopping nine-length victory. Her Winner’s Circle appearance, complete with the huge crowd of whooping ARC owners, was a challenge for legendary track photographer Gerry Hart (see photo left). This was the thrill the bunch of mostly first-time owners needed. Most signed up for the following year.

At the end of the meet, Spanish Fowl was sold to an ARC member and raced without much success in 2017. She went off the radar in 2018 and 2019. This May, Final Furlong, a wonderful group that finds new homes for OTTBs (Off the Track Thoroughbreds), found her for sale and put up the cash to buy her. Held at Emily Johnson’s little horse-heaven in Cook’s Creek for testing and farrier care, Louise Townsend, the first ARC owner to see her in 2016, had the chance to reunite with the now seven-year old mare for the last time (see photo right) before she travelled to a ‘forever home’ in Saskatchewan as a companion horse. Spanish music cues happy ending.

And, if you are wondering, here’s ARC’s other first horse Smed (see photo left) relaxing in a pond at his home since 2016 with a loving owner in Ontario.