A loud chuckle filled the office. “Tell me something good girl.” The voice boomed as the man behind it smiled and walked through the door. This was the way most of my late morning conversations with Ardell started. I didn’t know at the time that it would be the last time I heard that phrase.

In May of 2019 ASD suffered a great loss. The big man from South Dakota, with an even bigger personality, had passed away. The feeling of shock and disbelieve spread through the backstretch along with the news of his sudden passing. 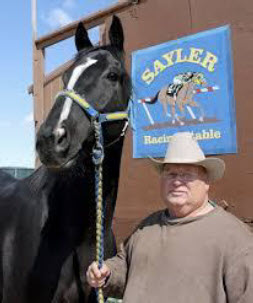 Soon to follow were all the stories. Horsemen sharing memories of the man they still struggled to believe was gone. There are so many stories about Ardell. So many career wins, training titles, and achievements, yet still not enough. The backstretch was still struggling to come to terms to losing one of their own and they rallied behind Ardell’s family. Sending staff to help with the morning chores, writing articles, planning a memorial service, asking what they could do, or just being there for his family. It was most definitely humbling to witness how close this community truly is.

Racing always seems to be a “to be continued,” sort of thing. At ASD we leave each other in September, and it is a to be continued moment until the following spring. Horsemen head off to another destination, or home for the winter months and are reunited in the spring with new hopes and hopefuls in their stables. As we fast approach the 2020 racing season the story of Ardell will not be continued by him. The story of Ardell will be continued by the horses and people left behind. In his horses that continue to run. In stories and photographs. In the people that have a career in racing because of him. In his family that will always be apart of the ASD family. It will be continued with the first open two-year-old race to be run each year in his name. Ardell’s physical self may be gone, but the memories and impact he has had on the Manitoba racing community will continue.

“I’ll see you later Ardell,” I said as he left my office. “If you’re lucky!” He said with a chuckle and closed the door.